You are here: Home / frugal living / how to make a toddler good behavior chart

Summer is a tricky time for discipline. Even though our kids are only in preschool, and their school schedule remains the same during the summer, they still know that things are off. Mom and Dad are home with them when they aren’t at school and the months are filled with trips that interrupt the routine they crave. This year, in an attempt to combat the behavior issues that often accompany summer break, I decided to make a toddler good behavior chart. 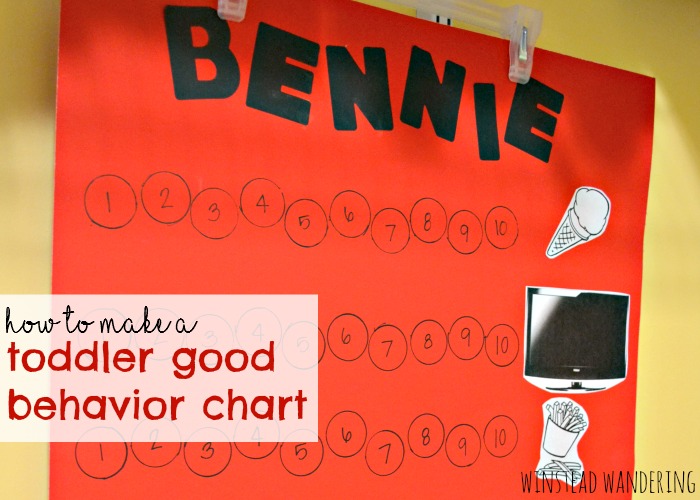 I had two main criteria when creating this system. The first was that the concept be uncomplicated. G. is four and B. is nearly three; I didn’t want something they’d have difficulty understanding or following. It would completely defeat the purpose of the chart if they didn’t know what they were working toward or how to get there.

The second criteria was for this to be specifically a chart to track and reward good behavior. We already have punishments in place for when the kids disobey; this chart wasn’t designed to supplement or replace those consequences. We won’t take stickers away when they misbehave.

Now, I know there’s controversy over rewarding children for doing what’s expected of them. I’ve learned, though, that positive reinforcement is a great teaching tool. No, our kids won’t always get an ice cream cone for picking up their toys, but I don’t think this chart is teaching them to expect that.

If you read the tutorial, you’ll see what I mean. 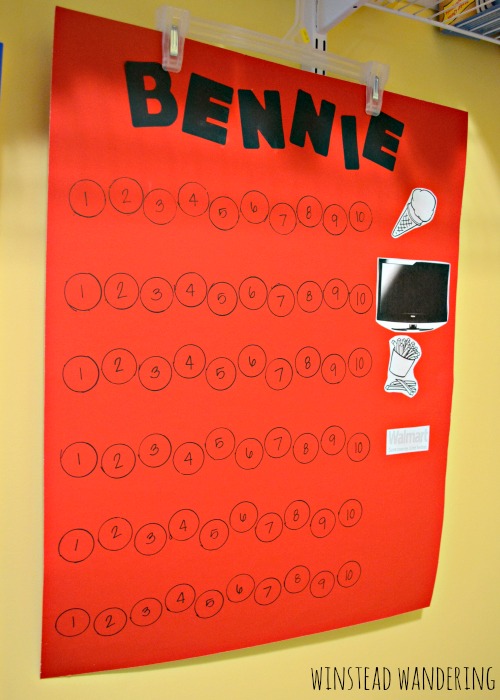 toddler good behavior chart
I can’t really attribute this idea to any one website; I just used a compilation of ideas I’ve seen in the past.

Of the materials listed above, the only real necessity is the poster board (or a piece of butcher paper). The other supplies are what I used to create my chart. 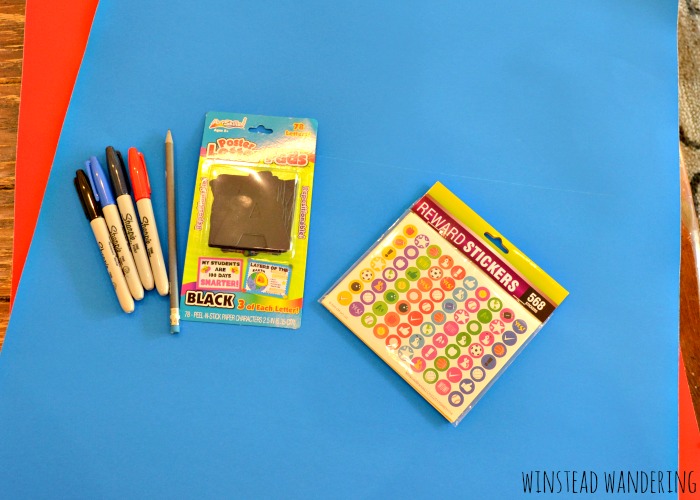 what you’ll do
1. Use stencils or these cool letter pads– they’re like post-its, but they’re letters- that I used to put your child’s name at the top of the poster. If you’re using the letter pads, you’ll want a glue stick to completely attach the letter to the paper. You could, of course, freehand the name, if you’re cool like that. 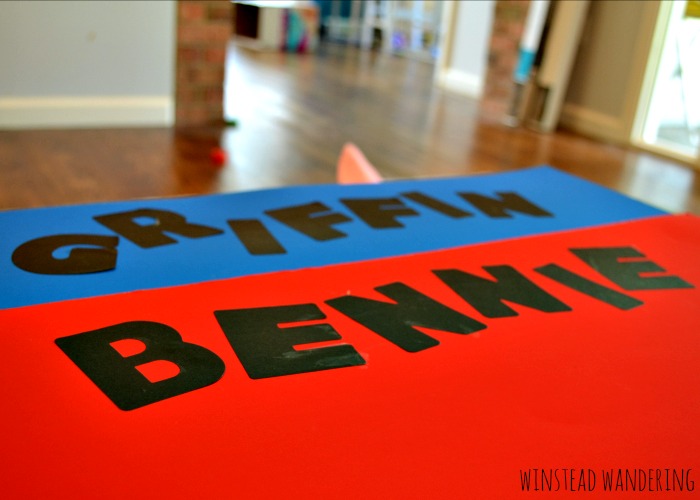 Try not to get glue everywhere like I did. 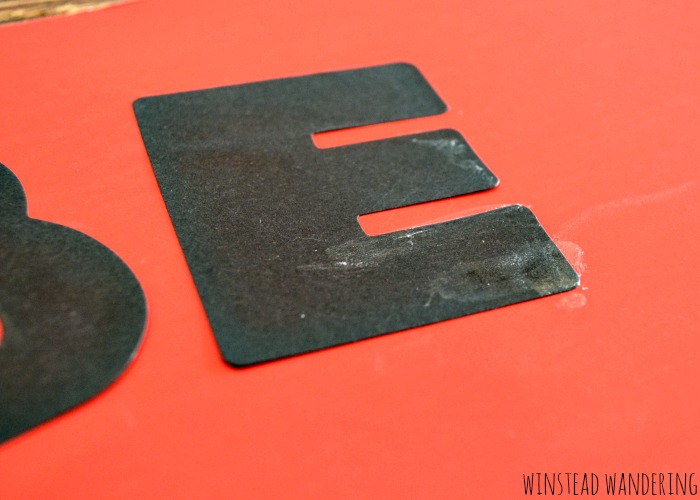 2. Next, you’ll want to draw the circles that will be filled in with stickers as your child works toward the goal. If you don’t want to freehand the circles, you’ll need something round to trace A small juice glass was too big and a water bottle top was too small, so I used J.’s little pot of Carmex. Perfect size. 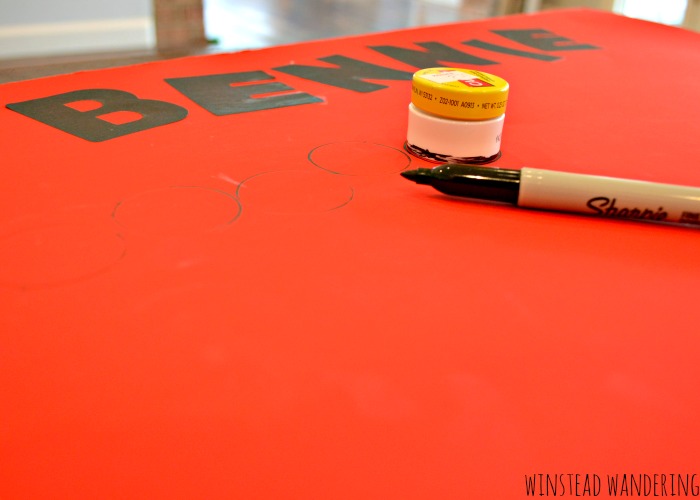 The number of circles you draw on each row will depend on how many stickers you want your child to earn before receiving a prize. I went with ten, because I wanted a number that was realistic, but didn’t mean we’d be buying ice cream or French fries every few days. Adjust your number to suit the capabilities of your child.

I purposely didn’t align the circles on my poster. I knew I could spend a lot of time and energy measuring and lining things up, or I could make it intentionally free form. Clearly, I chose the latter. 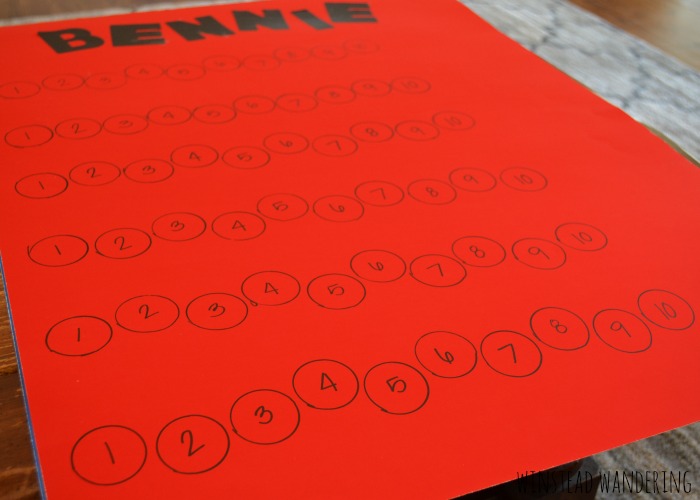 Be sure that your circles leave room at the end of each row to advertise the prize your child will receive upon filling the row with stickers.

3. When your poster is completely covered with circles, add the rewards to each row. If your child can read, it would be easiest to simply write in the name of the prize. If you can draw, you could illustrate the prize. Neither of those were options for me, so I printed a few images off the computer. 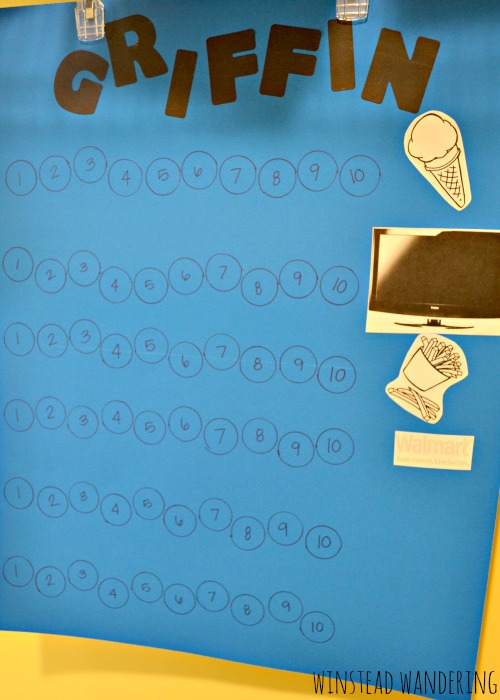 The rewards you choose should, of course, be tailored to your child and to your situation. Just make sure you’re choosing real incentives and not things your child will get or do even without the chart.

For us, living in a small town with children who are too young to entice with things like the skating rink or a trip to the movie theater- and wanting to keep the cost low- I opted to include: a trip for ice cream (which will likely be a snow cone), watching a movie with mom or dad (without the other sibling present; that’s a big deal), a trip to get French fries, and a trip to Walmart (which, in itself is a treat, but in this case it will involve the purchase of a small toy or a snack).

I didn’t fill in prizes for the last two rows because I couldn’t think of any more. when we get there, I’ll just recycle the two prizes they enjoyed the most. 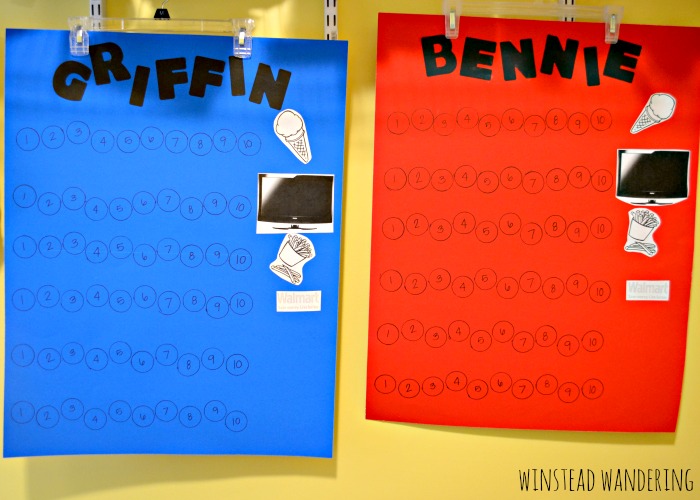 4. You’re done! Ideally, you’ll display your chart in a place where your child has the opportunity to look at it frequently. Since I didn’t want to tape ours to the walls in the house we just built, I decided to clip them to clothes hangers and hang them in the laundry room. It isn’t the most conspicuous location, but I’m just more diligent about bringing up the topic with the kids.

It actually worked out well because I clipped the stickers to the hanger, too; now I don’t have to worry about storing them somewhere else and hunting them down every time the kids earn one. 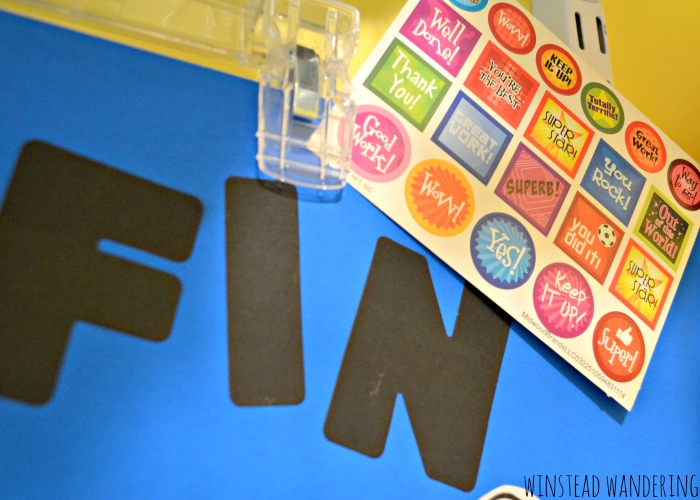 When we explained the chart system to G. and B., we got them started by giving them each a sticker in the first circle of their first row. It was a great way to get them excited about earning more.

what earns a sticker?

The goal here is to reinforce good behavior and to make it stick. With that in mind, give your child stickers for the choices and behaviors that you most want to see become habits.

We’re specifically looking for the kids to:
-eat all the food on their plates at supper
-put away a toy or game when finished without being asked
-do a favor or a kind act for a family member without prompting
-complete an undesirable activity- leaving their grandparents’ house, cleaning their rooms, getting out of the tub- with little or no fussing
-share with each other

This is a brief list, but it represents the areas in which we struggle the most. The beauty of this chart is that it doesn’t outline specific expectations. I can choose to give a sticker in a spontaneous moment to reinforce a behavior that I didn’t even know I was looking for.

What charts or systems have you used to reinforce positive behavior with your children?