You are here: Home / Uncategorized / how to make the world’s best homemade pizza

I think there are a lot of people out there who consider themselves pretty competent in the kitchen. They can follow any basic recipe, maybe even add their own spin to things, and come up with a tasty end result.

But a lot of those people are scared of yeast. 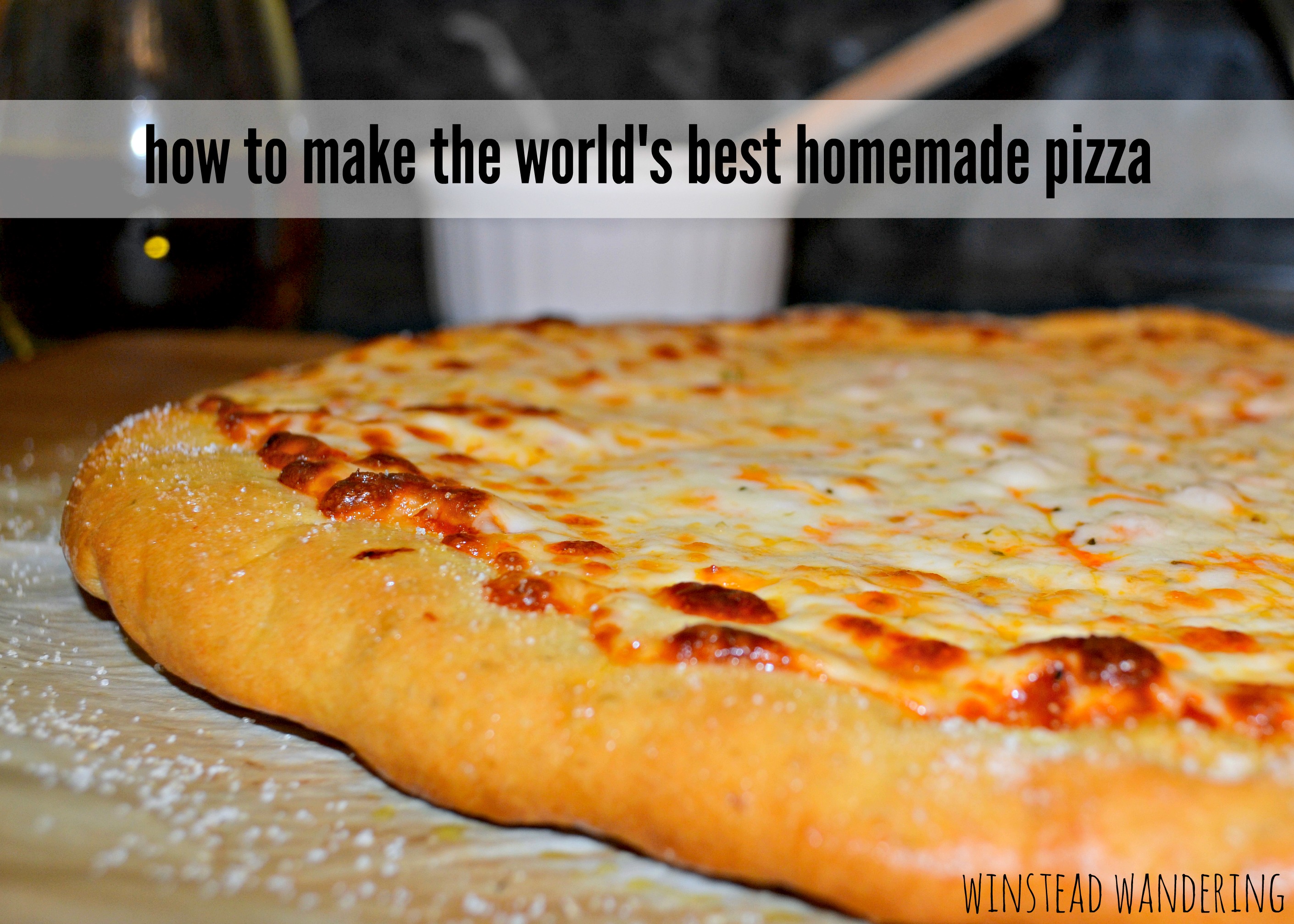 Here’s the recipe. But first, a few rules:

Get a pizza stone. If you’re ever going to re-create restaurant-quality pizza at home, a pizza stone is a must. It’s the only way to get that crispy, chewy bottom crust without over-cooking the top. You can pick one up for around $20. The money you save from no longer ordering delivery (we don’t buy frozen pizza anymore, either) will quickly pay for the stone.

Use Parchment Paper. In this recipe I preheat the oven with the pizza stone inside. Do you know how easy it is to transfer a floppy, raw pizza to a piping hot pizza stone? It’s not. It’s actually pretty near impossible; I’ve tried it several times. Most attempts included two people, four spatulas, and lots of spilled toppings. Save yourself the trouble, and the cleanup, and buy a roll of parchment paper. It’ll last forever and, like the pizza stone, it will more than pay for itself. 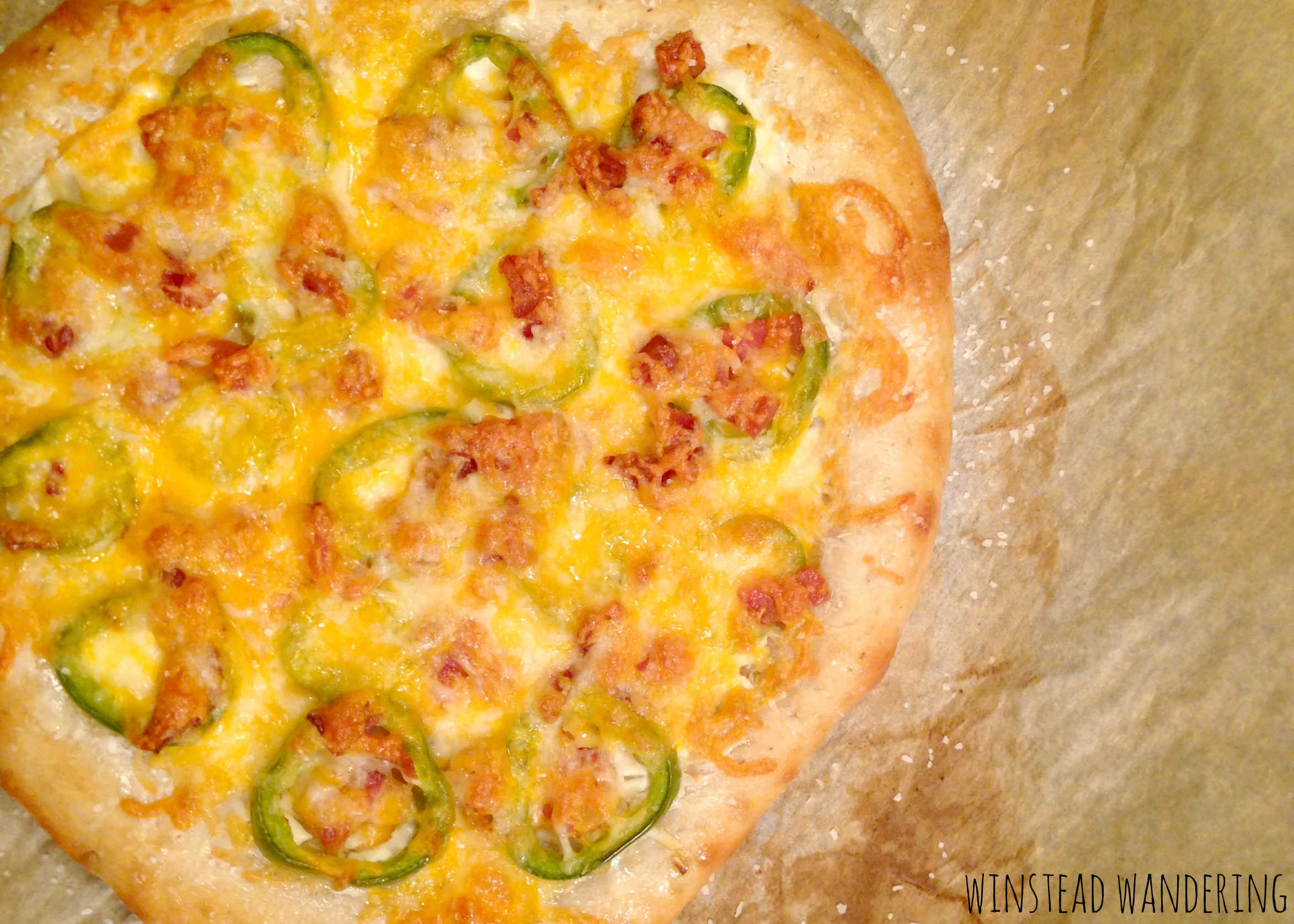 In a measuring cup or bowl, sprinkle the  yeast over 1/2 cup of hot water. Water should be warm, but not so hot that you can’t stand to hold your hand under it as it comes from the faucet. Set the mixture aside for a minute or two.

In the bowl of a stand mixer using the paddle attachment, briefly stir together the flour, half of the Oregano, and 1 1/2 teaspoons of the garlic salt.

Add the lukewarm water to the yeast mixture and stir gently until most of the yeast is dissolved. Add the olive oil.

With the mixer on low (for a KitchenAid, this is the “stir” setting), add the yeast mixture to the flour. Mix for about a minute until the dough starts to form a ball around the paddle. Remove the paddle attachment and replace it with the dough hook. Mix (KitchenAid setting 2) for 4-5 minutes. The dough should be cleaning the side of the bowl. The dough might be sticky at this point, but it should be smooth and shiny.

Transfer dough to an oiled bowl, or remove the dough from the mixing bowl, clean and spray the bowl, and put the dough back in. Turn the dough so the oiled side is facing up. Cover with plastic wrap and let rise for 1 1/2 to 2 hours, or until dough has doubled in size.

After dough has risen, remove the plastic wrap and punch the dough down. Place your pizza stone in the oven on the second-to-bottom rack and preheat to 475 degrees. Turn the dough out onto a lightly-floured surface and, using flour-dusted hands, knead the dough once or twice and shape it into a ball.

Divide the ball into two balls of equal size. Cover them with a damp towel and let them sit for 15-30 minutes.

**This recipe makes two pizzas, hence the two balls. If you want to freeze one chunk of dough for later use, do it now. Rather than cover the ball with a towel, simply wrap it in plastic wrap (the piece you used to cover the bowl of rising dough will work perfectly), place in a freezer bag, and put right in the freezer. To prepare the frozen dough, just remove the bag from the freezer and place it in the fridge 24 hours before you plan to use it. Prepare using the rest of the steps. Or, you can use the second half to make thesehomemade freezer calzones.**

When dough is finished resting, use a rolling pin or your hands to shape the ball in to a large circle. Lightly flour your hands, the pizza, and your work surface as needed. If dough doesn’t spread and springs back as you try to shape it, cover it with the towel and let it rest for another 10-15 minutes before trying again. Once pizza has reached your desired size (10-12 inches works best) transfer it to parchment paper. Using a fork, dock the dough by poking holes all through the crust, being sure to leave an un-docked one-inch rim.

Bake the un-topped crust for 5-7 minutes, or until it just begins to turn golden and lose it’s shine. Remove from the oven and immediately brush the outside crust with olive oil. Add your toppings and finish by sprinkling with Oregano.

Return the pizza to the oven for 6-8 more minutes, or until the cheese is melted and bubbly and the crust is a dark golden color. Remove the pizza and immediately brush the crust with olive oil again. Don’t worry about the edge being greasy; the crust will absorb the oil. Sprinkle the just-oiled crust with garlic salt.

What are your favorite pizza toppings? 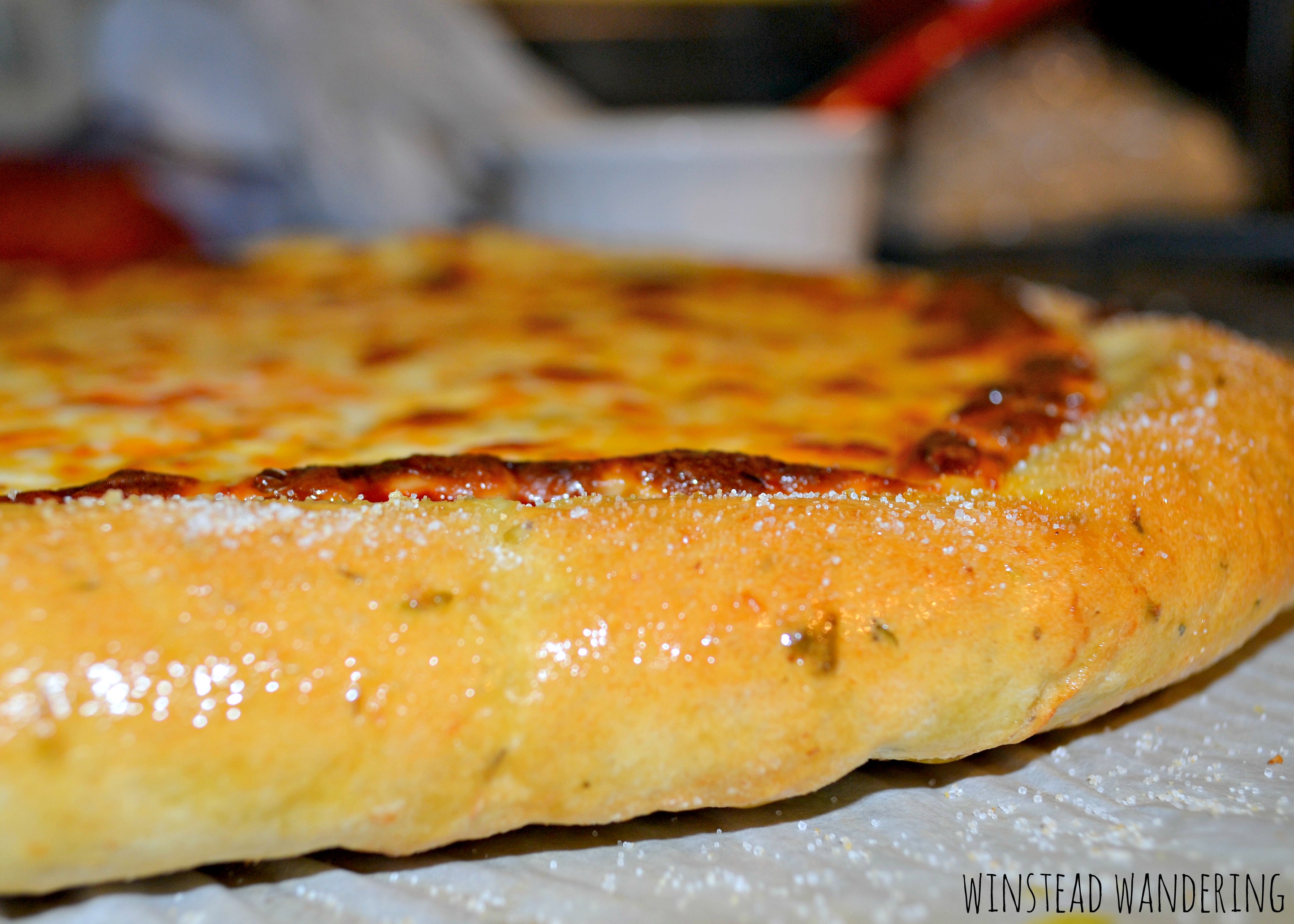