You are here: Home / dinner / Roasted Poblano and Onion Quesadillas

They be simple to make and require only five ingredients, but these Roasted Poblano and Onion Quesadillas are full of mellow vegetables and just the right amount of melted cheese. 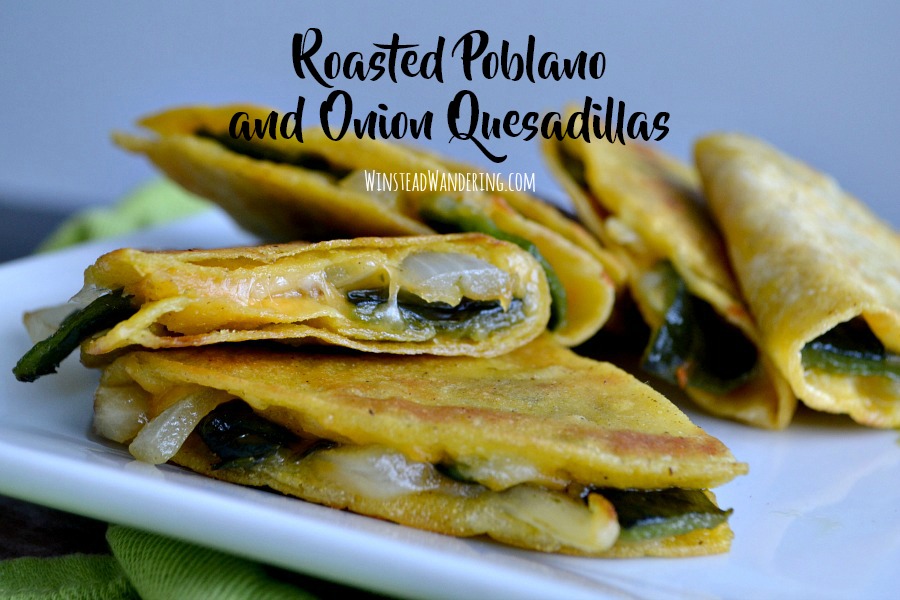 My local grocery stores don’t always have a large variety of peppers to choose from so, when I saw the crate of poblanos the other day, I grabbed a few without giving any thought to what I’d make with them.

I immediately roasted most of the peppers because I knew I’d want them that way for pretty much anything I would make. I ate some in a potatoes-and-eggs breakfast bowl and added a little more to a sandwich.

And then I made Roasted Poblano and Onion Quesadillas. The idea wasn’t original, since I make fajita quesadillas all the time. I decided to keep these a little simpler, though, to let the veggies shine. Now I’ve made them three times in the last week. Okay, fine. Four times.

I just.can’t.resist. Poblanos aren’t spicy; sometimes they carry a little heat, but mostly they’re just full of flavor. In addition, onions are probably one of my favorite vegetables. Add in a little cheese, plus the crispiness of the corn tortilla, and I could eat these things all day long. 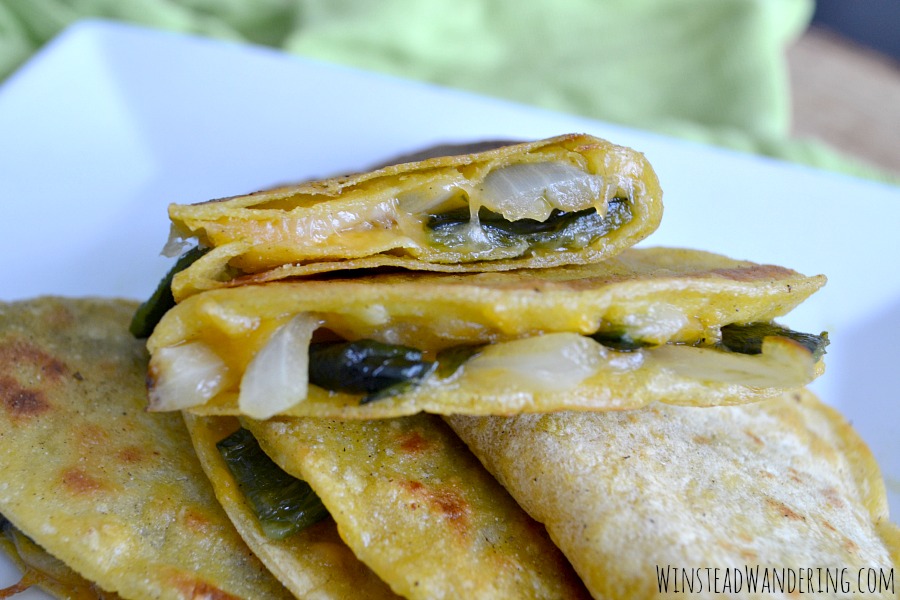 Begin by roasting the poblanos. Cut each in half lengthwise and lay them cut side down on a baking sheet. Place under a broiler until the skin of the peppers is black and blistered. Dice the onion while they’re roasting. When the peppers are done , transfer them to a medium bowl and cover tightly with plastic wrap. After about seven minutes, remove the plastic wrap and peel off the burnt skin; it should come off easily. Scrape out the seeds and cut the peppers into quarter-inch strips.

Next, heat a large skillet over medium heat. Add the olive oil and, when it’s hot, add the diced onion. Cook for about five minutes, stirring occasionally, or until onions are translucent. Add in the roasted poblanos and sprinkle with salt and pepper. Cook another two minutes more. Remove the onion and poblano mixture from the pan and set aside.

Now, place a corn tortilla in the pan (still over medium heat) and sprinkle with two tablespoons of cheese. Spread one-sixth of the peppers and onion over the cheese. Let the tortilla cook for four to six minutes, or until the bottom is toasted. Use a spatula to fold the tortilla in half, forming a quesadilla.

Repeat the quesadilla-making process five times. Enjoy warm with a side of sour cream.

These quesadillas are perfect with pepper jack cheese, but I often use cheddar.

You can totally add meat or additional vegetables if you’d like.

Don’t forget to pin these Roasted Poblano and Onion Quesadillas!