Today’s guest post is different than what I normally share on Winstead Wandering. Rayben, a former student of mine, sent me a text asking if she could share this post here. I said yes because I love to see young people with a passion for writing and with a passion for politics. 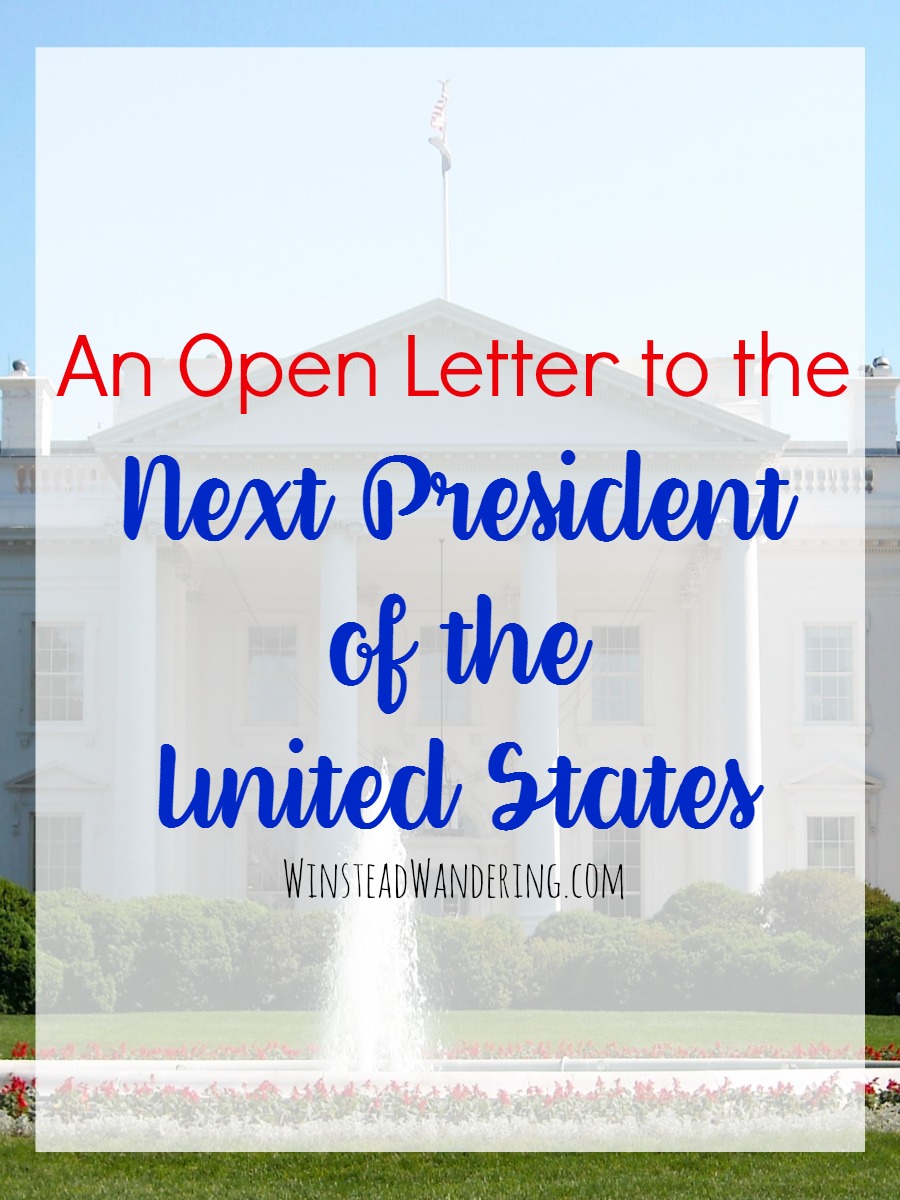 A clever play-on-words created by an experienced word-weaver, the phrase is more often used as a tactic of destruction rather than that of benevolence.

One of you declares his love for the minority; the other makes well-known his amnesty toward the radicals: Polar opinions with identical approaches.

Who really loves the most?

Some would say the left-wing, with their attempts to prove that “all are loved,” and “your life matters.” What they fail to inform the general populous of is that with every “we’re all equal” statement (to include a minority), a majority is displaced. You, the candidate say that “your life matters,” but not if the person they’re speaking to has been blessed with a hardship-free life, or if they’ve worked hard to live comfortably, or if they seem to have never been in a situation in which they had to choose between a luxury and necessity. You say our religion is accepted, but not if I worship this type of god, or if I pray more than once a day.

If the love expressed is “love” comprised of thinly-veiled attempts at gaining political momentum, how true are his intentions? Can love really be love if the person giving it has hate in his heart for the opposite opinion? If you’re using love as a means of demeaning others’ opinions and their beliefs, you’re not actually loving anyone.

Love does not envy

Love does not boast

A proud leader is usually not very well-received

Love is not rude

Where rudeness is, loyalty is not soon to follow

Love is not self-seeking

Self-promotion and self-adoration are unflattering

Love is not easily angered

A short temper is not quickly admired

Love does not delight in evil but rejoices with the truth

Lies and schemes are not in fellowship with true love

I say to you both:

Love may trump hate, but only, only if the love being expressed is a love cultivated with pure intentions: intentions only possible if one follows the outline given in 1 Corinthians 13.

Give me your love and acceptance, or bluntness and blatant disregard for others’ feelings all day, but I’d much rather have truth and discord, than lies and unity.

Regardless of how I vote in November, good luck to you both.

This summer berry crostata is a rustic homemade dough packed with juicy strawberries, plump blueberries, and the perfect complement of spices.

I’m taking a short blogging break to soak up time with my sweet newborn baby. Things won’t be silent around here, though; I’ve got some awesome bloggers lined up to step in and share some great content. Today, Lecy from A Simpler Grace is here sharing a must-make summer berry recipe.

I’m so excited to be here, on Winstead Wandering, and sharing my Summer Berry Crostata with you today! 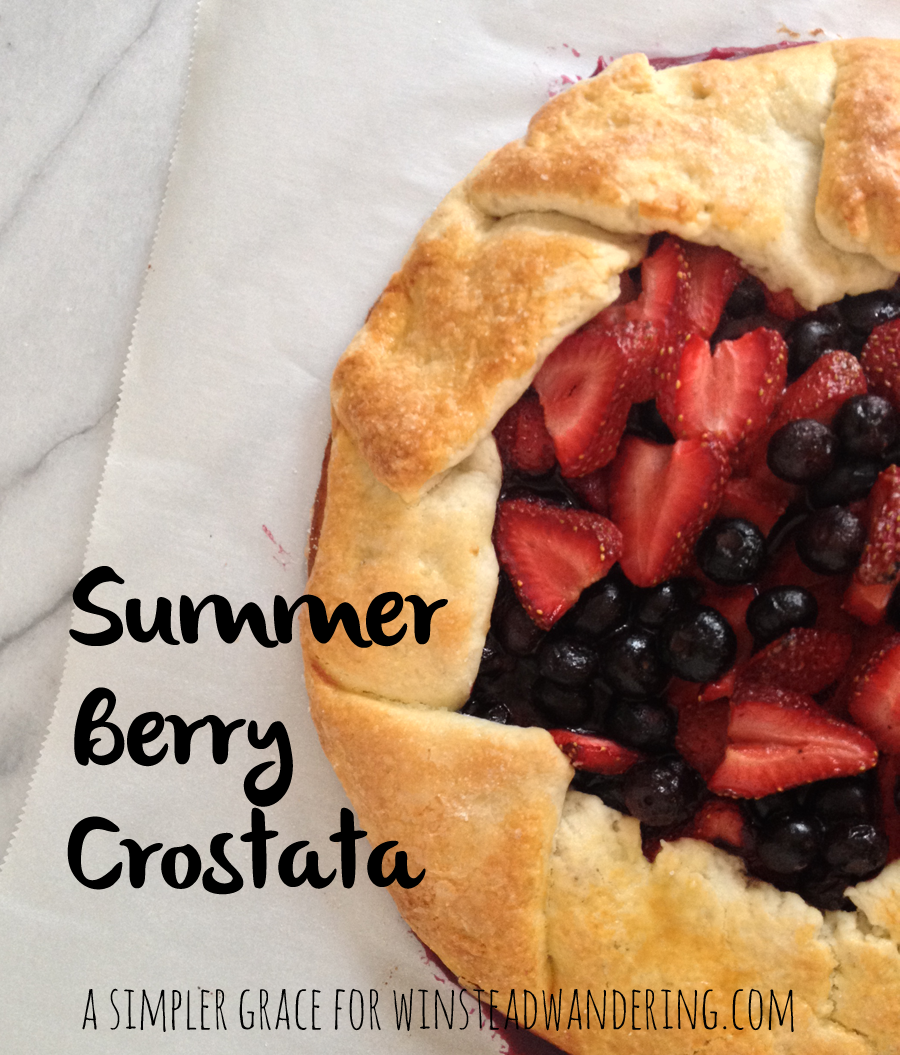 One of my favorite things to do is cook traditional Italian food and the only thing I love more than that is baking Italian pastries. Ok, maybe eating Italian pastries ranks up there too. I created this crostata recipe for a cookbook draft I’m working on and it’s one of my family’s favorites, so when Abby asked me to share a recipe with you all, I knew this was the one!

The term crostata might sound fancy, but it’s really just a free-form tart or pie and can be filled with a variety of things, but summer fruits are the best! 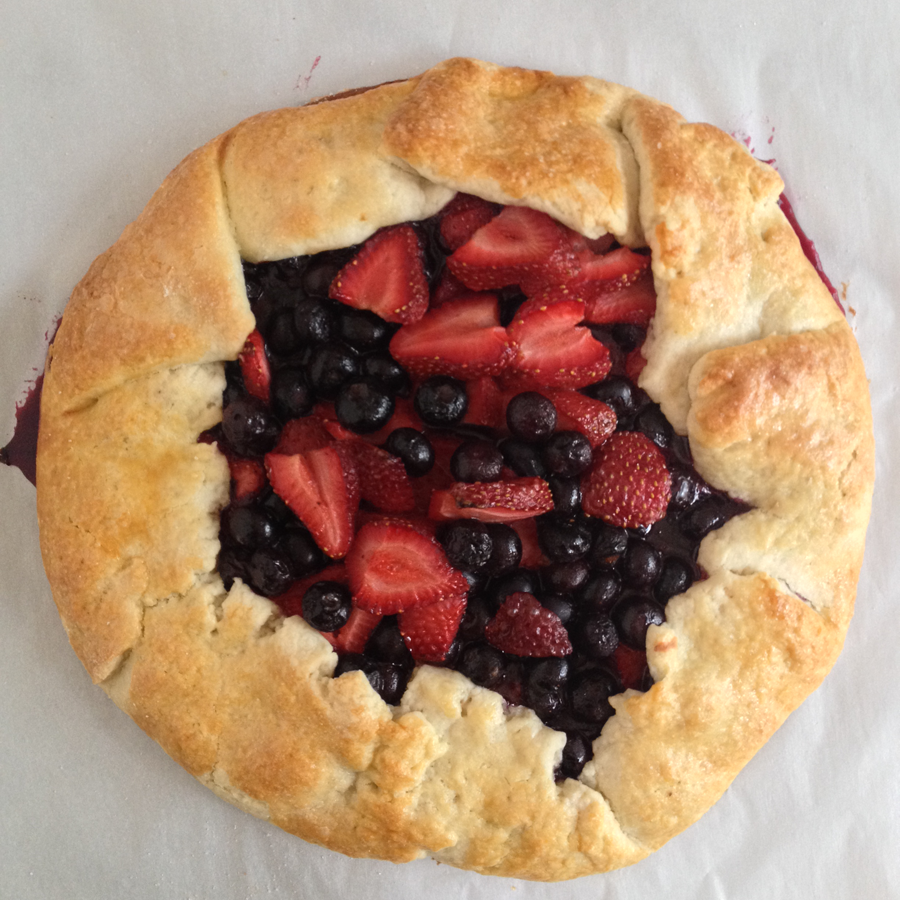 END_OF_DOCUMENT_TOKEN_TO_BE_REPLACED

Whether you’re a mom, a blogger, a wife, or all or none of the above, you can ditch that overloaded to-do list and follow these 3 steps to a personal mission statement.

I’m taking a short blogging break to soak up time with my sweet newborn baby. Things won’t be silent around here, though; I’ve got some awesome bloggers lined up to step in and share some great content. Today, Angela from Setting My Intention is here talking about creating a personal mission statement.

If you’re anything like me, you like to write to-do lists – and even better, you like to cross off items on your to-do list. It’s satisfying knowing that you’ve completed a number of items that needed to get done. If you’re a mom, a wife, a business owner, or any combination of these and other roles, the list could go on and on and on.

Recently though, I’ve had a change of heart in terms of what should be on my to-do list. I’ve taken a step back to write down what my highest priorities are in this current season of life. Taking the time to thoughtfully write these priorities down has changed my lists and how I use my time. This step by step guide on goal planning with intention and purpose has helped me create a personal mission statement for the first time.

3 Steps to a Personal Mission Statement

Step 1: Write down all of your current roles. Now pick the top 5.

My priorities in this current season are:

I value other things, of course, like friendships, service, and maintaining my home, but they aren’t the most important priorities during this current season.

This exercise helped me realize that my priorities are currently skewed. Based on how I currently spend my time, blogging and building up my business are at the top of my priority list instead of my most important relationships.

END_OF_DOCUMENT_TOKEN_TO_BE_REPLACED

Using white wine instead of red, this peach and blueberry sangria is a refreshing new twist on an old summer favorite.

I’m taking a short blogging break to soak up time with my sweet newborn baby. Things won’t be silent around here, though; I’ve got some awesome bloggers lined up to step in and share some great content. Today, Anne from Simple and Savory is here with a refreshing summer drink recipe.

Hello, it’s Anne from Simple and Savory helping out Abby while she is getting ready for the arrival of her baby. Today I’m sharing my favorite refreshing summer cocktail ~ homemade peach and blueberry sangria. It’s filled with fresh fruit and it’s easy to sip on a hot summer day. 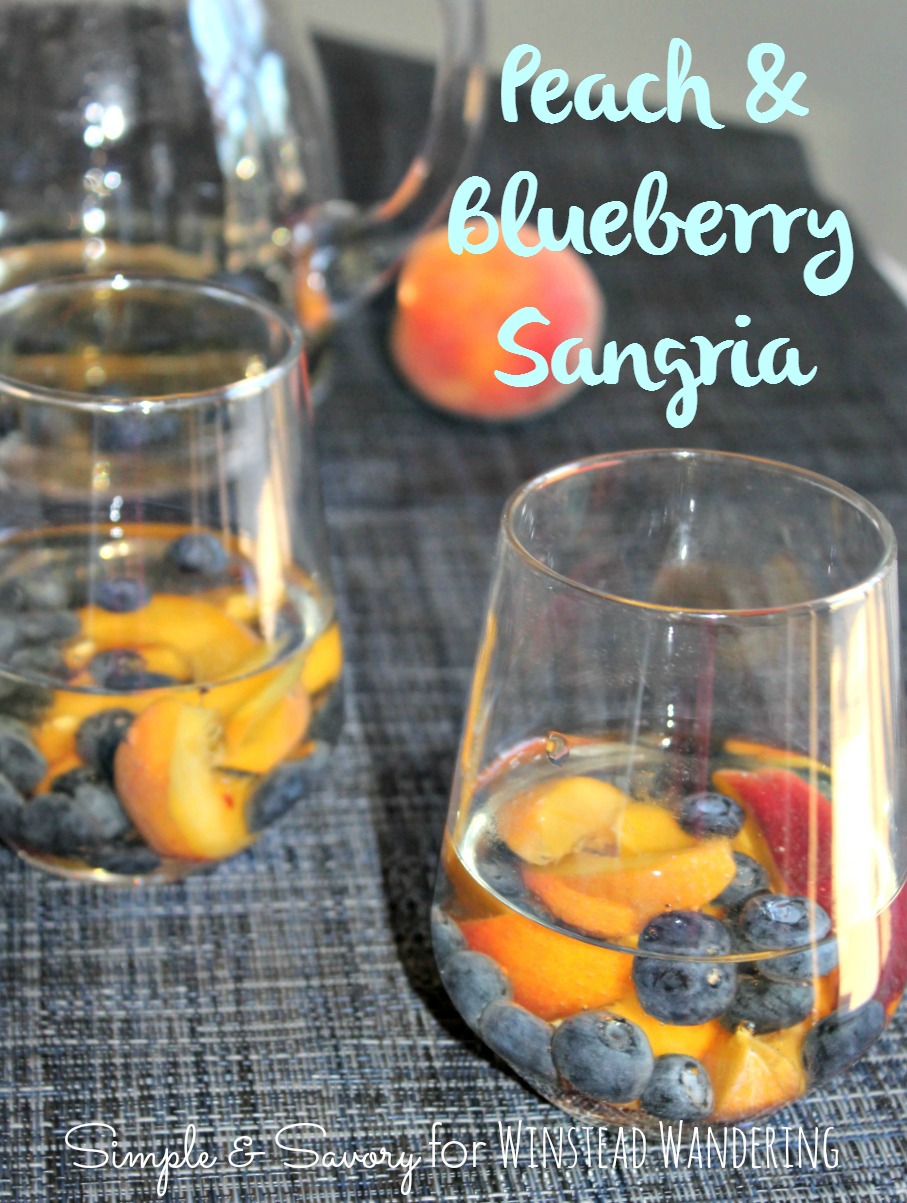 Ice cold sparkling peach and blueberry sangria is a perfect summer cocktail. Traditional sangria is made with red wine, but when the weather heats up, I like a lighter version. White wine is the perfect choice for a light sangria and the fresh, local fruit adds a hint of sweetness.

Homemade sangria is easy to make and is much better for you than the pre-made sangrias that have way too much added sugar. All you have to do is place the fruit into a pitcher, add the wine, a shot of brandy and a little bit of honey and let it chill for an hour or two.

END_OF_DOCUMENT_TOKEN_TO_BE_REPLACED

Blogging is hard, and there’s a lot of conflicting advice out there. Here are 3 things I learned from my first year blogging.

I’m taking a short blogging break to soak up time with my sweet newborn baby. Things won’t be silent around here, though; I’ve got some awesome bloggers lined up to step in and share some great content. Today, Reeve from Girl on the Verge is here to talk about one of my favorite topics, blogging. 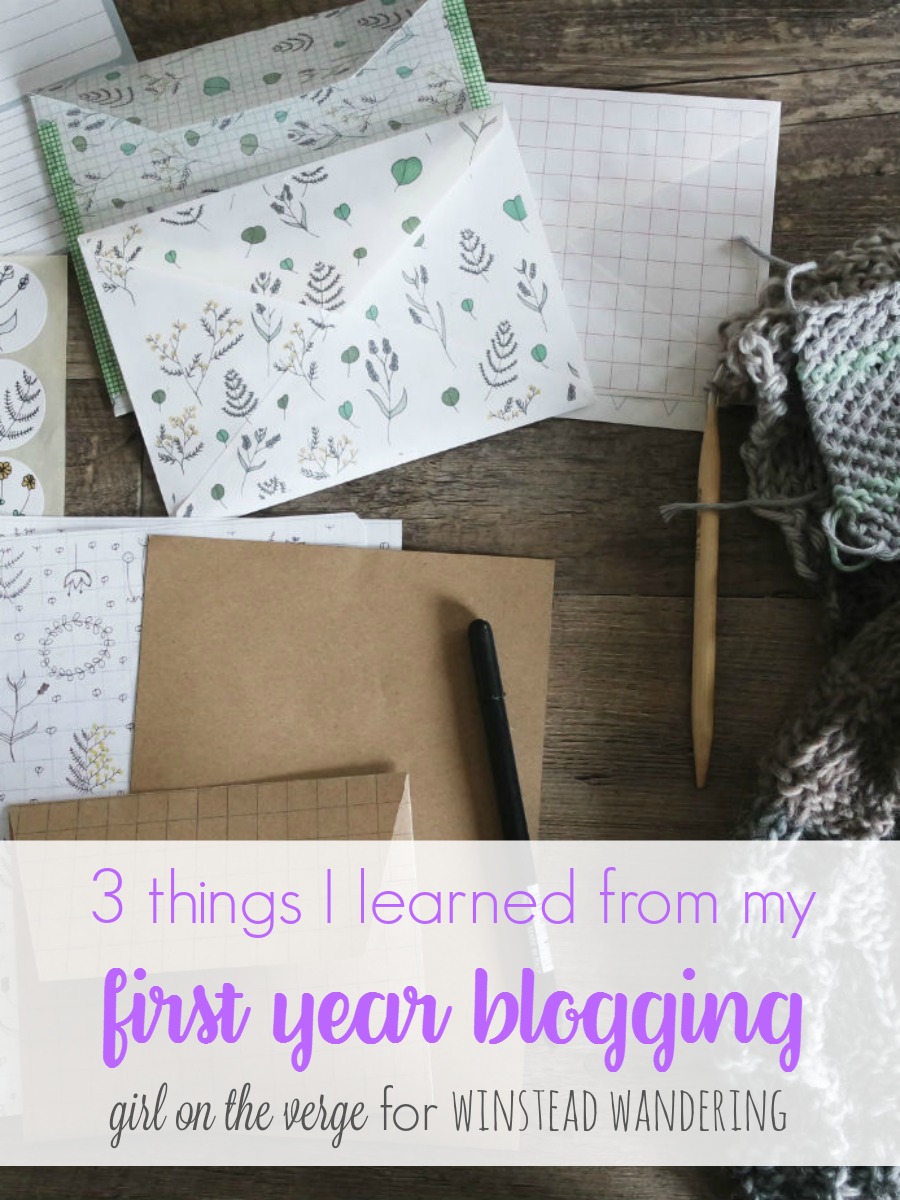 3 things I learned from my first year blogging